Marco, are down and wants to go windsurfing

Happiness is real only when shared. (Christopher McCandless – Into The Wild) If slipping on the water makes it so’ happy windsurfers to such an extent as to make the sport of windsurfing for many a real philosophy of life, What we can’ be better to share this happiness?
And’ from this premise that’ match the RIWmag initiative and the Club Nautico Loano who invited the ADSO (Down Association Savona Onlus – www.adsosavona.it) for an afternoon of initiation into the sailboard.(WDAY # 2) The event and’ played Thursday’ 13 August (2015) at the headquarters of the Circolo Nautico Loano (SV - www.circolonauticoloano.it/) and involved E.P., RIWmag Manager, Cesare Vignola and Frank Barreca as representatives of the Circolo Nautico Loano, boys competitive team of Loano (Francesco, Simone, David, Carola, Matilda, Marta, Sara and Joel) but above all their, Kids with disabilities: Serena, Francesco, Anna, Letizia, Carlotta, Matthew and Leonardo accompanied by their parents and by two attendants Vania and Ezio. 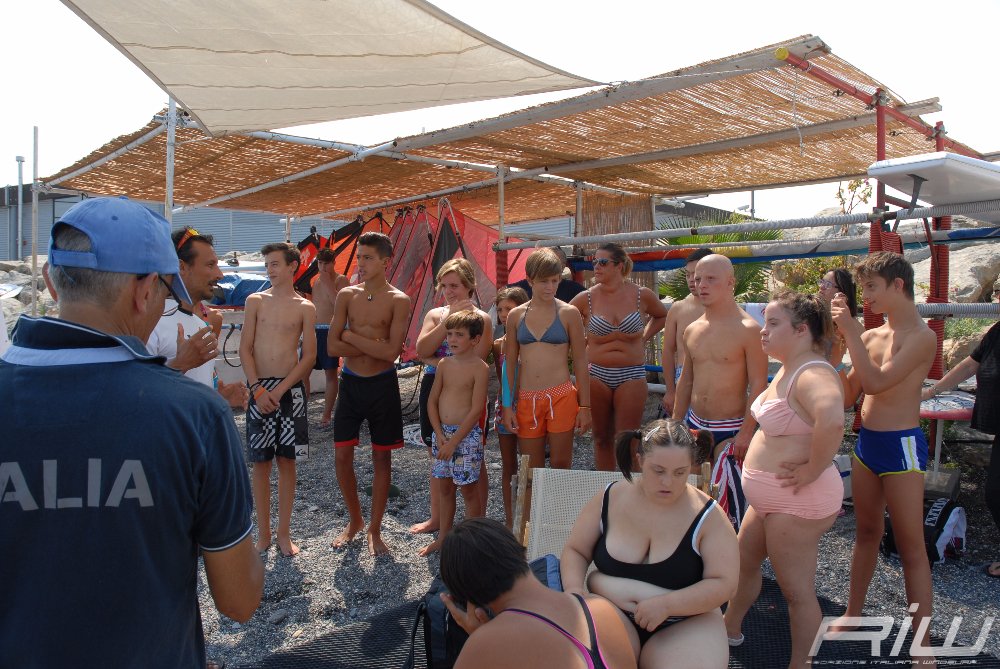 The afternoon and’ started with a short welcome speech by E.P.: “windsurfing and’ emotion and freedom. 5 years ago I had a meeting here with the kids of this circle, then beginners (WDAY # 1), and today I have the pleasure and the honour to read their names in the rankings of national and international events of the class T293. I hope that this experience will please you as clearly and’ like them!” 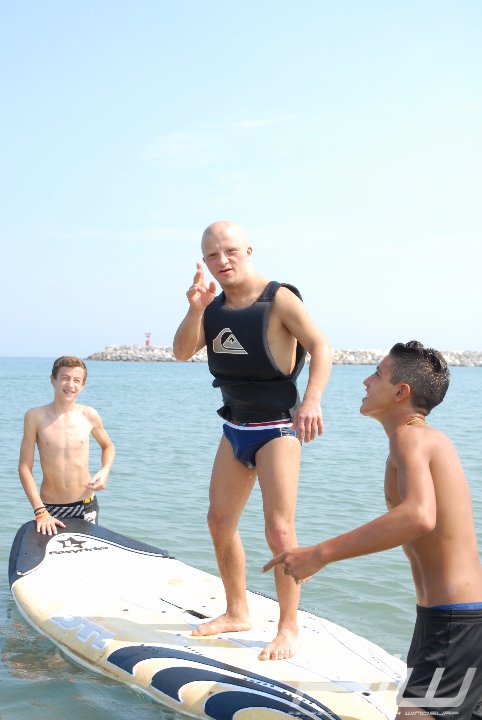 The young guests were torn between the desire and enthusiasm to learn something new and a little’ in fear having to compare with a new business. As a first step there were balance tests on water tables but without sails.
The young racers Club were led under the attentive eye of Caesar Vignola and Franco while the evolutions of the Babcock new beginners were observed with amazement and amusement by their companions. 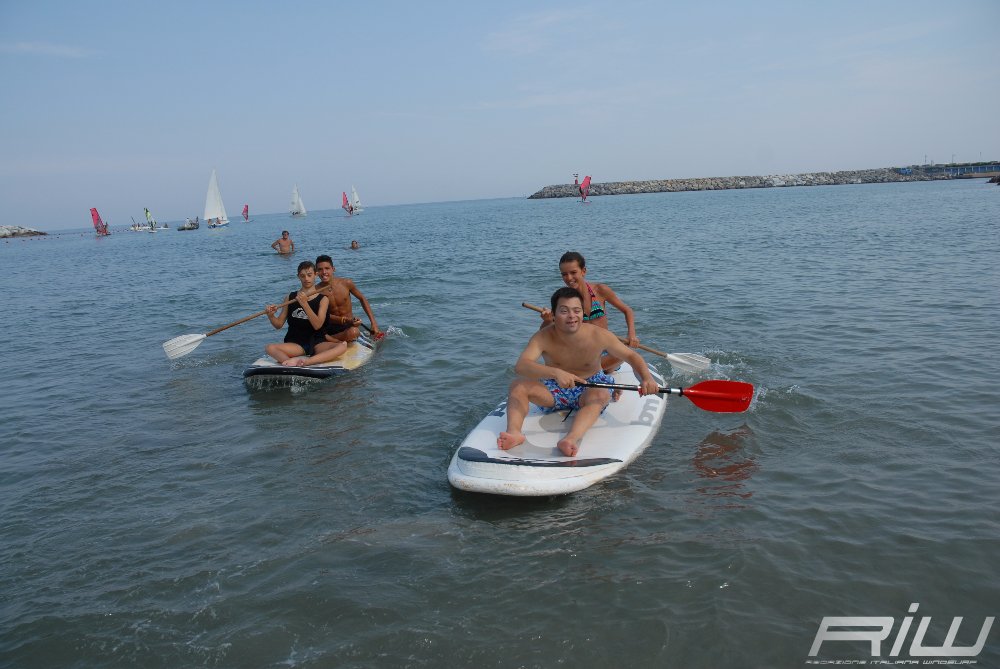 As a second step you and’ played racing paddling sitting on the table (even without sails). On each table to a bow and stern ADSO host a young racer.
And then finally the long awaited by all, get on the windsurfing. The weather conditions were perfectly calm with a light breeze from the West. 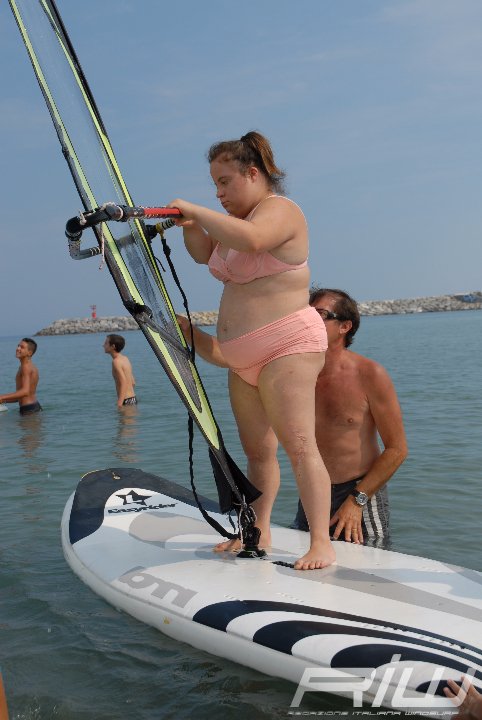 Some with some difficulty’ Home, others with greater skill and resourcefulness, at the end of the session all participants were able to balance yourself and do a few meters without the help of anyone and with great satisfaction of all present.
Once the part is and sports’ passed to snack with typical Ligurian and pizza focacci here are really beautiful views: some of the kids with disabilities, Perhaps thanks to the fame after an afternoon spent on board with veil, they did plunder of food available on the table.
Finally satisfied the stomach and’ passed to certificates of investments and some gadgets for both new adepts of windsurfing that for boys competitive team whose generous collaboration and’ was one of the key elements for the success of this exciting afternoon for everyone. 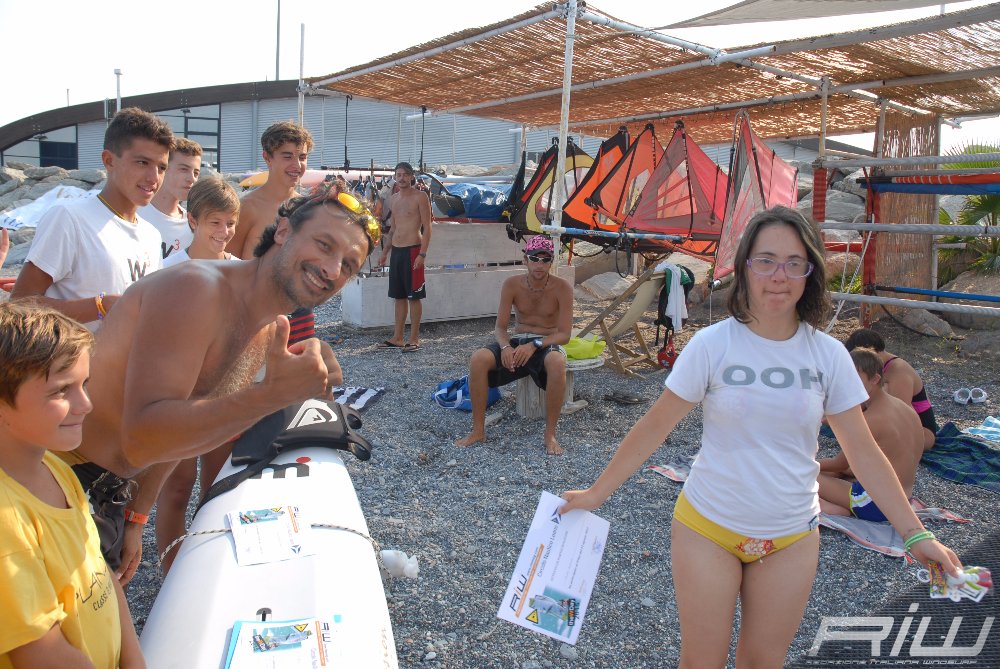 The chatter at the end of the day on the beach with some of the parents and persons they ADSO highlighted some aspects of the quotidinita’ and these guys path “Special”.
May be various difficulties’ that they and their families face more’ compared to those faced by boys “normally adept”. Sometimes things’ trivial and other discount for them can be some real achievements, How to orient oneself along a city and be able to return to your starting point without getting lost, or to manage independently and autonomously a job, often in the hospitality environment, or can handle some behaviors such as excessive eating to gluttony (and someone’ managed to gobble up 15 pizza slices and some slices of focaccia and French). Yet, Despite these mountains to climb steadily, These guys know have and demonstrate its extraordinary resources and their parents know offering of big smiles and moments of profound simplicity.

The Down Association Savona Onlus was born on 15 April 2003 by a group of parents of people Down in the province of Savona.
The ADSO aims to:
- Designing initiatives to improve the quality of life of the person Down at school, workplace, sociale.
- Promote conferences, refresher courses, collaborations with institutions which pursue objectives contained in its Charter..
- Foster, in the province of Savona, a network linking the various rehabilitation projects, of autonomy, of employment that does not lose sight of the person Down inserted in its social context.
- Support projects relating to "after us" enabling the widest possible autonomy to the person Down in relation to adult skill attained. AFTER TEN YEARS OF ACTIVITY
ADSO managers have started in 2003, without money, without seat and with many ideas. They then got a container from scuola edile di Savona, they equipped office with the help of the foundation De Mari, and there they laid the first projects, always looking to increase the autonomy of women for inclusion in the social life of the area they inhabit. Now the projects are developed in their headquarters in via San Lorenzo, but some are still in place today.
A 8 years since their inception one of these is: "I'm Marco, are down and I would ... " educational and social project that sees the boys go out one night a week to go to the Bowling, go eat a pizza, go clubbing, a few Festival, at the cinema or theater. All this to make them feel like every other boy their age, Let them accept the community and make them autonomous as possible in the city with opportunities for all, with the collaboration of professional educators.
In addition to the sporting activities supported (Volleyball, bowls, Football, skiing, swimming) the ADSO is and’ associated with Italy and participates in Special Olympics sports events that are held every year for people with disabilities. A guy ADSO participated successfully at the world Snowboarding Championships that were held in the USA in Sun Valley, Another was summoned for skiing in Korea, and their volleyball team went to the World Championships in Greece. But beyond the results, What fills us with satisfaction the ADSO is responsible to have improved the quality of the everyday life of their children because the sporting event is annually, is training throughout the year and helps them strengthen their skills.