Back the weekend friends of RIWMAG and METEOVENTI. This time he prepares a full weekend of wind on our beautiful country, but accompanied by bad weather on many coasts, in particular Sunday.
It will all be associated with pressure gradient that will be created due to the contrast between a North Atlantic disturbance, that already is making inroads on the Western Mediterranean, with an area of high pressure over the Eastern Mediterranean regions. The pressure difference between the two structures will weather fan on Italy.
Saturday, the disturbance from the North Atlantic will begin to feel its effects on the Ligurian coast and then slide down the Italian Tyrrhenian coasts during the afternoon. Much of the coast of Italy will be ventilated by winds from the South.
On Sunday we will have bad weather generalized, but still a noteworthy ventilation on all regions.

Pressure (Geopotential Height 500 Black isoline HPA) and temperature (in color) at high altitude, planned for the night between Saturday and Sunday. Highlighted actors weekend weather: the disturbance from the North-Atlantic and high pressure over the Eastern Mediterranean, the opposition will have a windy weekend, but in many cases disrupted (source data-GFS www.lamma.rete.toscana.it www.ncdc.noaa.gov and processed by METEOEVENTI). 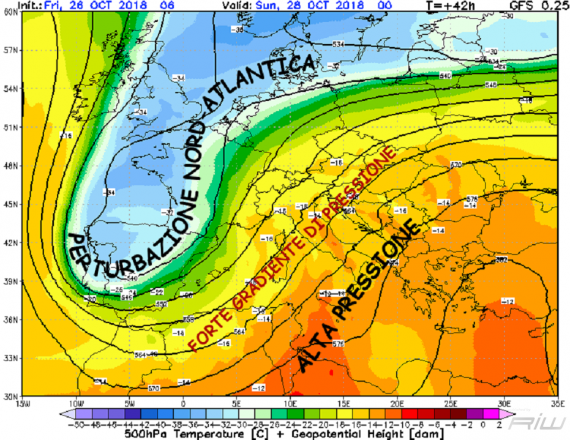 We summarize the situation of the winds at the weekend, also giving a look at expected rains.

SATURDAY
NORTH Tyrrhenian: Twenty of the Libeccio and the Ostro will blow on the Ligurian coast between 18 and the 20 nodes, but the context will be disrupted, with sleet, more intense in genovese.
Even the coasts of Tuscany will see good ventilation from the South with medium intensity on 18/20 nodes in intensifying in the afternoon mainly on grossetano (up to 25/28 nodes).
The Adriatic coast: ventilation from the South on all the coasts of the northeast of the peninsula, initially on 20 nodes, in intensifying in the afternoon until 22/25 nodes, in particular the Friulian coast.
Ventilated CENTRE il Tirreno. Expected winds of Lazio and Southern Tuscany coasts Ostro with intensity on 20 nodes, in stepping up to 25/28 knots by afternoon. We will have storms on these shores with waves on 2 meters, rising up over the 3 m in the afternoon.
The Adriatic Sea will not be outdone. Ventilation will increase from late morning and in the afternoon we will have Sirocco winds on 18/20 nodes on all coasts.
SOUTH Tyrrhenian Side: windy for twenty of the Southwest and South on 15 nodes, but most likely on the coasts bells and those overlooking the Strait of Messina (Here the Ostro will push far beyond 25/28 nodes).
Adriatic side: the coast of Gargano are suckers from morning to Ostro on 20 nodes. Later in the day, but in particular from the afternoon, Southeast winds will blow on the Adriatic coast of Puglia from easternmost until barese Strait of Otranto with intensity between 22 and the 25 nodes.
The Ionian: Twenty of the Libeccio and the Ostro will begin to blow on the coast of Salento and Calabria South of Crotone (15/18 nodes). Later in the day will be more southern and ventilation in intensification up to 25/28 nodes. Ostro forte on the coast overlooking the Strait from the morning with South to 25/28 nodes.
ISLANDS In Sardinia the winds from the South will blow on all the coasts except those further north of Gallura. Medium intensity waited on 20 knots in the morning, in reinforcement from the afternoon until 25/30 nodes.
In Sicily strong ventilation by SSE on all coasts (18/20 nodes) and in particular on those of Trapani and from late morning (up to 30/32 knots with waves up to 2-2,5 m).

SUNDAY
NORTH winds from the South will blow on our shores, both of the Adriatic (28/30 nodes) that the Tyrrhenian coast (20/22 nodes), but they will be in mitigation from the afternoon on the Ligurian coast. On the latter aware of potential WEATHER ALERTS that will be issued tomorrow for thunderstorms. Ventilation will be accompanied by time disrupted and storms.
CENTER high winds from the South will blow out of all the Tyrrhenian coast with medium intensity on 22/25 nodes, but they will be accompanied by bad weather with thunderstorm. He waited, also storm surges, with waves up over 4 meters on the coasts of Lazio.
The Adriatic side will be less rainy, but very windy for strong Sirocco winds on 25/28 nodes.
SOUTH winds south-southeast for All ventilated from the coasts of southern Italy. The intensity will be on average about 20 nodes on the Tyrrhenian coast, 25/28 nodes on the Adriatic and Ionian Seas.
Expected storm surges on all coasts, also among the waves 3 and the 4 meters on the Ionian Sea. Also the bad weather will affect the Tyrrhenian and Ionic part of South Italy.
ISLANDS Sardinia will be, Yes sucker, but also rainy. Winds from the South will blow over 20 nodes on the coasts of the island, but they will be accompanied by bad weather with rain and storms.
In Sicily will continue the strong ventilation from the South-Southeast (18/20 nodes), but we will have more intense winds and up to 25/30 nodes on the coast of Trapani and still rough seas with waves on 2-2,5 meters. The bad weather will not spare even the Sicilian coast, particularly those further south where there will be thunderstorms.

Good weekend everyone, then and, as usual ... MAY THE WIND BE WITH YOU ...
Stay tuned with METEOEVENTI