Friends of RIWMAG and METEOEVENTI welcome back.
Autumn has now begun yesterday and the large-scale weather situation meets the expectations of the new season: the "Atlantic gate" is open for the entry of the perturbations typical of this period, Charges, then, of rain and also wind.
Saturday, in fact, a large area of low pressure will affect much of our continent and within it a disturbance from northern Europe will move southwards bringing moist air from the sea to our peninsula. This will bring bad weather, initially in the northwest and moving to the remaining northern and central Italian regions. The baric contrast of the low pressure with the residue of the anticyclone present on the southern Italian regions will favor a good ventilation on many of our coasts.
On Sunday the disturbance will continue its advance towards the central south of our peninsula and the pressure gradient still present on our seas will maintain favorable conditions for good ventilation.

Pressure (Geopotential Height Black isoline) temperature (in color) scheduled for the night between Saturday and Sunday. The vast area of low pressure extended from northern Europe to the western Mediterranean and which will pass over the weekend is clearly evident. (source ECMWF www.ecmwf.int and elaborated by METEOEVENTI). 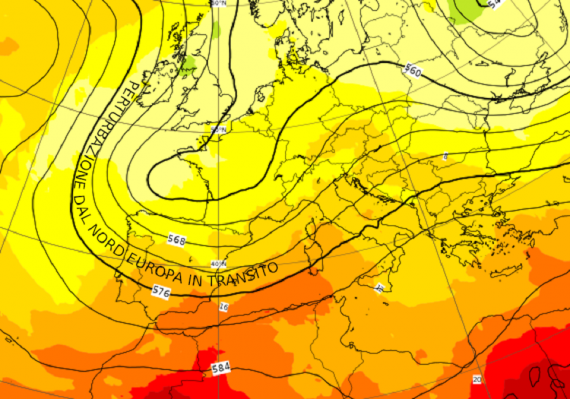 Let's see together where to find wind and favorable weather for safe weekend rides.

north Tyrrhenian side: a good ventilation of Grecale will affect the coasts of the ligurian east, but the weather will be disturbed with the possibility of strong thunderstorms in particular between the Genoese and the La Spezia (ATTENTION to the alerts that will be issued in the coming days);
Adriatic side: the bad weather will arrive late and the coasts of Ancona will see a scirocco ventilation intensify in the afternoon on the 18/20 nodes.
About large alpine lakes we will have gray weather with rain that will pass from the northwest sector to the east in the day and, especially, little wind.

center Tyrrhenian side: windy day for Scirocco on the 15/18 knots intensifying from the afternoon until beyond the 20 nodes. However, just from the afternoon the weather is expected to worsen markedly with rain that will come to affect in the evening the Grosseto and Viterbo, leaving the remaining Lazio coasts free;
Adriatic side: the Scirocco will blow on the Adriatic coasts with average intensity on the 15 nodes, intensifying during the afternoon and higher values on the Marche coasts.

south Adriatic side: the Scirocco will intensify from late morning affecting the coasts from Brindisi to Gargano. The southwest will blow with intensity on the 18/20 nodes, passing off the coast of Foggia south of the Gargano;
Ionic side: even on the Ionian coasts the Scirocco will begin to blow from late morning starting from Crotonese up to the Lucanian and Taranto coasts during the afternoon. Expected average intensity on 20 knots in Crotonese and 15 nodes elsewhere;
Tyrrhenian side: nothing to report.

islands Sardinia: wind from the South will blow well on the southern coasts, east and west. Expected average intensity on 20/22 nodes to the east and west, while less intense winds will blow south of the island 15/18 nodes. The weather will be slightly disturbed to the north of the island;
Sicily: to enjoy good ventilation will be the coasts of Trapani where winds of Ostro (from the South) they will blow well and with medium intensity on 20/22 nodes.

north Tyrrhenian side: a weak libeccio up 15 knots could intensify from late morning on the coasts between Imperia and Savona.
Adriatic side: winds expected from the southern quadrants that will push from the coasts of Ancona towards Trieste, passing, However, off the coast of Romagna, Emilian and Venetian. The wind will be, However, accompanied by rain and thunderstorms in particular on the Friulian part (ATTENTION to any alerts that will be issued), and will be in sudden attenuation already in the morning.

center disrupted day with rain and thunderstorms, in particular on the Tyrrhenian coasts (here ATTENTION to the possible alerts that will be issued).

south Adriatic side: winds from the South quadrants will affect the coasts from Brindisi to the Otranto channel. Expected average intensity on 15/18 nodes on the first and 20/22 nodes on the latter;
Ionic side: even on these coasts the winds will come mainly from the southern quadrants. They will blow in the morning on the 12/15 knots between the Taranto coasts and the Ionian Salento, intensifying from late morning and also affecting the Calabrian coasts of Crotone and Cosenza (20/22 nodes), as well as the Lucanian coasts (15 nodes);
Tyrrhenian side: will be windy, but disturbed with thunderstorms, the Neapolitan coasts.
The tyrrhenian spots overlooking the Strait of Messina will see a ventilation from the South initially on the 15 nodes, intensifying to beyond 20 knots already in the morning in a slightly disturbed context.

islands to be reported again in Sicily the winds from the South that will blow in trapani on the 25/28 nodes. Even the coasts on the border with Agrigento will be windy for Scirocco on the 15/18 nodes, but here a slightly disturbed day is expected in particular on the eastern part of that province. By report, In addition, a ventilation on the 20 knots on the Tyrrhenian part of Messina.

I wish you all good wind and ... MAY THE WIND BE WITH YOU!
Stay tuned with METEOEVENTI