TestWindsurf in Dakhla 2013: the return

We receive kindly from Paul Marquis and publish:

“The success of the voyage to Cape Verde made me think right away in Dakhla and as I travel for Crazy People : a limited group of friends or people who might become one who share our passion for windsurfing, but with a great desire to have fun together, in simplicity. The journey of Dakhla 2011 It was epochal, and the combination of me, Robert, Jacopo and others 30 friends was magical and unrepeatable, so why repeat it tell someone?

Because this year will be even better and explain why!!!

1) Meanwhile, the journey, the first leg will be the day, unabated in Casablanca, on the return there is nothing to do…but total 9gg referred 7 surfable are a nice number. (Obviously the unknown wind is predictable by anyone but the 84% of surfable days in April will want to say something ... No?)

2) Then the Dakhla Attitude that we will host this time has been completely rearranged, with the Elimination of some tent, not all, and new bungalows (windHunter), new dining room, new recreational spaces….for wives who are afraid of getting bored I say there is also a new SPA….

3) Because there will be a chance to make a real stage with Upali that maybe many of the Lake Como area know, a nice person and careful in water. Famous because Sinhala/Comasco and shouts in water…but you will see that there will also be fun!

4) Because I'd rather put a limited number to the group that will be least 20 persons and max of 25, because the coach must be able to follow all, whatever the level, clearly we are talking about regular surfers and not hardened freestyler!! And then in Dakhla wishing you can bring your own equipment, at an acceptable cost, and despite the surf Center management has changed, Dakhla is a classic place to kites and boards don't have many!! (Do not be afraid, the kite and windsurfing are in separate areas…)

5) On top of everything else is an optional package of extras very interesting, including a trip Down wind until the white dune (and then we come to resume), place truly from skin d’0CA!!!!
An exit on the ocean in windsurfing.
A Surf Trip to the ocean with surfboard, ocean fishing, etc. . More details below

With that said here are the numbers:

I state that the costs are a little higher just because the Dakhla Attitude has had great improvements….but consider that apart from alcohol, then there is nothing left, except for any optional tours.

But the great thing is that the costs are modular, because you can choose to stay in tent or Bungalow, in single or double maybe sharing a room with a friend.

the flight, Dakhla airport transfers, Full board (breakfast, lunch, dinner)
Beach assistance
Security boat throughout the period.
Free use of kayaks, SUP stand up paddle in the unlikely case of less wind…
Grill and beach bar party with live music and DJ Hatim.

The course of our Coach Upali is 50 € per person for a group of 16/20 students to divide into groups. The course will be both theoretical and practical in water.

The rent is in the Middle WindfishPro and costs 202,5 € per 7 Gg. (discounted by 10%) , You can bring your own equipment because transportation is quite convenient (less of the rental) , of course we must be equipped to transport.

Package of extra costs €65 per person:

The night in Casablanca costa 70 € Because the put option? Because those who feel very sporty can sleep in the airport and save €70….Otherwise just include it !!
These prices are calculated to Malpensa because as usual we will be the most numerous, but you can also start from Bologna and Rome, If you are interested I will update on prices (Maybe they are even less).

I don't know if there will be a sponsor for the Lycra as 2 years ago, and as in Dahab (and here again I thank flower and Nunzio indeed Studio Ingegneria Lamura and Datalog for their contribution!) But if there will be as always nice to have the licra equal to photos and identify with water. Without a Sponsor as always my creative work I put it available again…in Exchange for my Lycra, and if you want to have our 20 Licre at cost of €30.

What can you say about Dakhla:
A) Maybe in 2011 We were very lucky, We had morning from 5,3 and afternoons 4 meters, but the percentage of Dakhla is very high, the trade wind that in April starts blowing, He joins a thermal effect and a venturi effect which the wilderness behind pushes strong in laguna, crushed by fossil field Hill. We cannot unfortunately at a distance of 3 months in advance what we will….but fingers crossed and we rely on probability-astrology!!!

(B)) We are at 30 km from the airport of the town of Dakhla, that probably we will go to visit, but the spectacular thing is not the city but the absence of city….you get to the field after a few km of desert, with the jeep, and the next morning it turns out one of the most spectacular views you can imagine, climb the Hill and enjoy the show!! 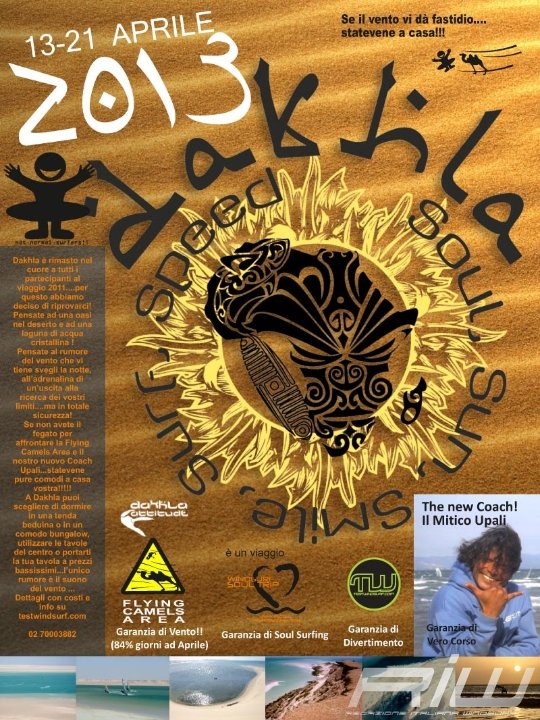